You can have your cake and eat it too! A dynamite pair of versatile vocalists teams up to deliver treats from the worlds of both opera and Broadway. The delectable menu features selections ranging from The Barber of Seville and Carmen to My Fair Lady, West Side Story, Wicked, and The Phantom of the Opera. It's a feast for the ears!

Soprano Shana Blake Hill is known for creating and premiering new roles and contemporary works, as well as bringing a thoughtful and modern perspective to the heroines of the standard repertoire. Critics have described her as a “fearless actress” and as “visually and vocally voluptuous.” She has sung principal roles with: the Los Angeles Opera, Savonlinna Festival Opera, Dayton Opera, Cincinnati Opera, Long Beach Opera, Santa Barbara Opera, and many others.

With over one hundred roles to his credit, baritone Roberto Perlas Gomez has performed extensively throughout the United States. He has performed leading roles with most of the regional companies in California as well as supporting roles with the Michigan Opera, Los Angeles Opera, and San Francisco Opera. He solos frequently with the Verdi Chorus. In addition, he has performed internationally with the Shanghai Opera and at the Kennedy Center with the Philippine National Opera. Parental Guidance Suggested - May be unsuitable for Younger Children

The Folsom Lake Symphony, established in 2004, brings beautiful classical music to the Folsom Lake region. The Folsom Lake Symphony is honored to be the resident orchestra at the Harris Center for the Arts, selling out concerts with acclaimed performance soloists and engaging the next generation of musicians with its youth outreach programs. Our 2019-2020 season is a “tasty” blend of artful combinations and contrasts. Common ingredients blend together our festive “Bianco natale” celebration in December or “Opera Meets Broadway” in June. But also savor the complementary contrasts of Brubeck and Rachmaninoff in October, or the fusion of a trip down a Czech river with an American’s visit to Paris in February. And the pairing of Lalo’s Symphonie espagnole with Holst’s The Planets—the tasty combination is out of this world! 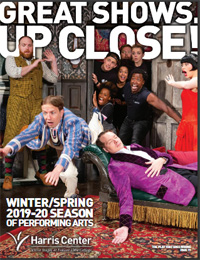